“Just look both ways, twice,” my Kiwi friend quipped with a smirk as we discussed the practicalities of my entire driving career and most of my walking career being on the right side of the road and suddenly transporting myself to the left.

It’s not bad advice. Sometimes, no matter where you are, you have to look both ways twice to avoid being gobsmacked by a truck… or your own mind.
I’ve been living at a place called Twelve Mile Delta. New Zealand, as a Commonwealth country, is mostly fiercely metric but there’s some holdovers from the hodgepodge of imperial measurements that still plague the UK. (A hitchhiker with a posh British accent was complaining about this recently: “Speed is kilometers but distance is miles, height is in feet and inches, but weight is in stones for no reason at all!”) I think if I were to sketch the most beautiful place in the world for me to live, it would look an awful lot like this Department of Conservation campground. The mountains rise drastically from the glacially-fed and forever chilly lake, and I can see the Remarkables in the distance living up to their name and shielding the population center from my sight.

Twelve Mile is about a ten-minute drive from Queenstown, and then depending on the time of day, it can take another ten minutes to get through the ten blocks that make up the CBD. (Oh, can someone tell me if this is an Oceania phrase? I don’t think I’ve ever heard anyone refer to downtown as the Central Business District in Europe.) With mountains on three sides and Lake Wakatipu on the fourth, there is nowhere for the city to sprawl, so the people pile on top of each other in a place that – not so very long ago – sent its citizens to Alexandra for shopping and groceries. This small town has no place to grow: it makes perfect sense to me why they hate freedom campers and tourists.
It can get a little suffocating with only one road through the city. Being away from the busyness is like a breath of fresh air every night, staring up at a million stars and waking to fog rolling over the lake as the mountains slowly allow the sun downward to burn it off. But even with a much smaller DOC population, I’ve managed to find myself a bit of community. Probably 70% of the backpackers in a country teeming with them are traveling either in pairs or posses. Those of us traveling solo are much more likely to be male. I managed to find myself two other gals living in vans at my campground, and we park next to each other and invited other solo wanderers into our circle each evening. We share meals (leftovers are an impossibility without a fridge), and drink whatever free beers were handed out at work while discussing our various countries and travels in all their glories and impossibilities. They call me Grandma – the two regular girls are 19 and 20, and even though most of our adopted friends are 26-30, I’m the old soul who turns in when it’s too dark to see and drinks tea while reading books.

It’s been delightful the last few weeks, but yesterday, I looked both ways twice.
I keep forgetting that I’m not trapped here, and I don’t have to live anyone else’s life. I don’t have to be Grandma and make pleasant conversation every evening. I don’t have to have coordinated plans about which direction to go next. I don’t have to go on long hikes or deep yoga stretches or jump in a freezing cold lake.
So after work, instead of going south to camp, I turned north.
I picked up a hitchhiker and brought him along the Cardona mountains to Wanaka, slowing my speech and enunciating my words so that this Frenchman could understand me. He offered to cook me dinner as thanks for the lift, but I needed solitude. I dropped him off and spent the next 24 hours without saying a word. I drove up a highway and a long gravel road past sheep and cows and a gray-blue river and shattered mountains until I came to a ford. The sky was darkening, so I settled in to watch the evening come. When morning broke, the dawn showed off just how brilliant Mount Aspiring National Park actually is as glacier feeding my stream reflected the golden light. 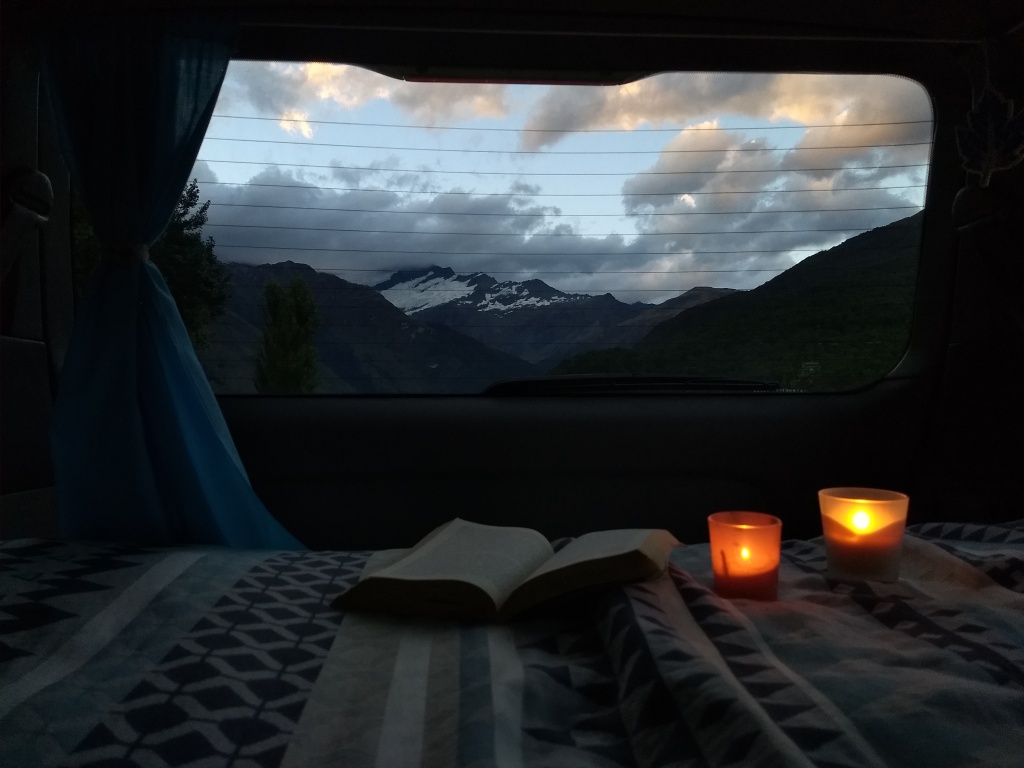 I had a long, slow, lazy morning. I made coffee just for me, I did a little yoga while twitching away from the sandflies, I read The Little Prince. I was hidden from the road, so I watched dozens of vehicles cross the ford and go on into the parkland. Eventually, I joined them. I drove until I ran out of road, crossing half a dozen fords and reminding myself to be patient that not everyone is comfortable on gravel roads. I saw a sheep with a long tail and spent the next ten minutes trying to remember the nursery rhyme about that. And then I got to the parking lot and felt overwhelmed by the sheer volume of people.
“I should hike this trail.” I told myself.
“Why?” my inner voice replied.
“Well… because my friends in the States would! Because Young Adventuress would! Because it’s a place you’ve never been before, so that’s what you always do! Because it’s Mount Aspiring and that’s a cool name!”
“But neither of them are you. And you don’t want to be around people right now. There’s always going to be something you’ve never done, and there’s always going to be cool names.”
It’s a very strange thing, having to give myself permission to not do something. This wasn’t because of the physical limitations of hurting my knee. This was a mental limitation of too much time around people, too much time around noise, too much time around the beaten track. I still needed silence, I needed more time to be alone.
I looked both ways twice, and I turned around.

One thought on “Both Ways Twice”