“I’m not trying to hit on you or convert you,” the rabbi assured us as he amiably gathered up his things. “Are you from around here?”
Mel grinned, her curly blond hair flouncing as she turned her hair to look at the gentleman who had been sitting at the next table over. “I am.” He glanced at me, then. “I’m from out of town.”
“Nice to meet you,” he responded. “I’m the rabbi at the synagogue right around the corner and my wife and I just came for a coffee. I just wanted to say hello!”
Nodding his head in a final farewell, we watched him disappear out of Zanzibar.
For half a beat, we tried to return to our conversation that had been interrupted.
“Nope,” I said. “Gotta talk about that.”
“I love everything that just happened there,” Mel agreed. “Absolutely everything about that.”

That’s one of the best things about travel, I’d say: simply the people you meet along the way.

In seventy-six hours, I traveled an absurd 1274 miles visiting with friends that I have known ranging from six months to seven years. I once couch surfed through the formal website, but this was my favorite style. A futon one night, a wooden floor the next, a proper couch the next. The temperature soared from the 60s to nearly 100, and my mind was happily engaged in audiobooks about science and history.

We sat outside new restaurants and watched the sun go down. We watched meteor showers from untouched observation decks and plotted the (un)likelihood of a tornado that day. We drank coffee. I chuckled at my Polish friend’s disgust at Americans’ use of ice in their drinks. I successfully navigated Kansas City, but hit a snag in Des Moines less than a mile from where I’d spent a summer (it’s okay, I forgive your directions!). We laughed, we were serious, we learned from each other and of each other.

It was a whirlwind, and even though I am utterly exhausted (and will not try to do such a long trip by myself in such a short time frame again), it was worth it. It makes me feel so alive. 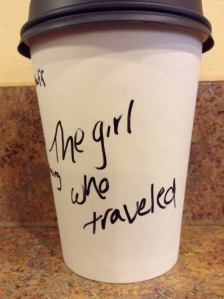